Klayman: Nothing New: Kevin McCarthy & the Republican Establishment in Congress Are Dishonest Worthless Liars!
Order "It Takes a Counter-Revolution!" at Amazon.com
Donate and Support Freedom Watch at www.FreedomWatchUSA.org 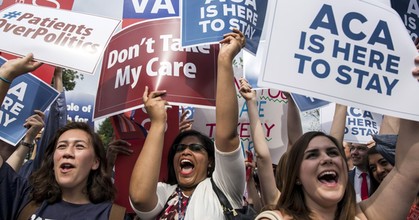 Republicans abandon Obamacare repeal
NBC News
October 3, 2022
Republicans are abandoning their long crusade to repeal the Affordable Care Act, making the 2022 election the first in more than a decade that won't be fought over whether to protect or undo President Barack Obama's signature achievement.

The diminished appetite for repeal means the law — which has extended health care coverage to millions of people and survived numerous near-death experiences in Congress and the courts — now appears safer than ever.

With slightly more than a month before the next election, Republicans in Congress and on the campaign trail aren't making an issue of Obamacare. None of the Republican Senate nominees running in eight key battleground states have called for unwinding the ACA on their campaign websites, according to an NBC News review. The candidates scarcely mention the 2010 law or health insurance policy in general. And in interviews on Capitol Hill, key GOP lawmakers said the desire for repeal has faded.